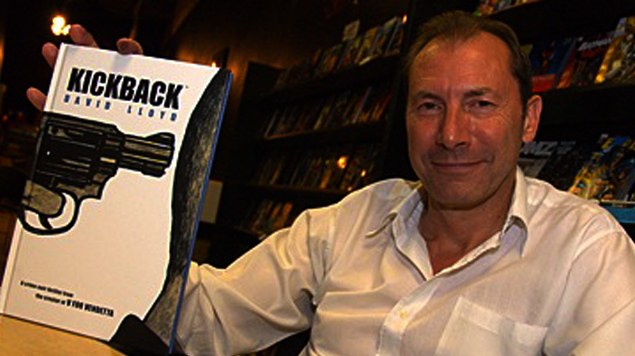 Bahniwé: What made you decide to become an artist? What are your inspiration sources?

David Lloyd: Well, I always loved to draw, but the first time I realised I could make a career of it, was when I was a kid. I saw a TV show which was some kind of educational programme, with a lot of people in a studio representing different kinds of professions—and one of them was a commercial artist, a guy sitting at a big drawing table. It looked cool—a great way to make a living! So I thought, that is what I wanna do.

But the people who inspired me... I didn't know European comics, we didn't have access to them in England. There was Tintin, but I didn’t really like it—it was too gentle for me. So, when I was a kid, there was Steve Ditko, and two English strip artists - Ron Embleton and John Burns - who are not really very well-known outside England. They were really great, and they were the two greatest influences on me, I think.

DL: Well , I only discovered European them very late with things like Metal Hurlant... but I really admire the work of the creators here. You're very lucky in France—you have a fantastic range of great creators at different levels, and a wide range of readers who are interested in a wide range of stories. That keeps the medium of strips healthy and open to artistic growth. In England, only a small section of the public buys comics regularly so our only long-running comic of relevance to fans of the medium is the science-fiction title, 2000 AD.

A lot of the creators who worked on that book are now working in the American market. DC comics recognised the quality of the folks working on that comic and came over to the UK in the mid-'80s and invited a whole crowd of them to dinner at the Savoy Hotel—one of the most exclusive hotels in England—to convince them they should work for them. It was a succesful tactic. At the time, you'd be lucky to get a pub lunch from a British publisher - they tended to look on their contributors as dispensible and interchangeable. 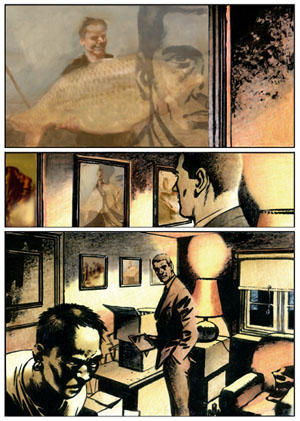 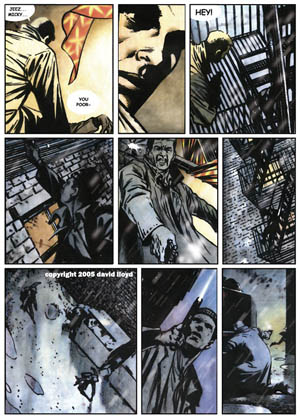 ABOVE : Pages from Kickback

B: When did you begin to draw attention to yourself as an artist?

DL: When I was drawing Night-Raven for the British division of Marvel : Marvel UK. That was the first thing that made people notice me very much - it showcased some of my strengths.

The editor there at that time was Dez Skinn.  Before he took over they'd only published reprinted American stuff, but Dez began to publish English artists and writers in original stories specifically created for a comic he'd been commisioned to produce : Hulk Comic, a Brtish-format-style comic launched to capitalise on the appearance of the Hulk TV show in the UK.  That’s where I drew Night- Raven. He was a vigilante, a crime fighter in Prohibition America.  When Dez started his own comics magazine later, he wanted a character similar to Raven created for it, so he basically asked me to come up with something and write and draw it myself.  But I'd worked with Alan very well before that and he had a much greater writer's brain than me at the time - and still has - so I felt the strip would be much better if he scripted it.  He agreed and history was made.

The story of how V for Vendetta fully developed is all in the article at the end of the collected US edition, and it's too long a story to go into here... 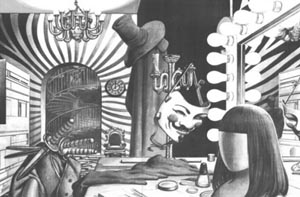 B: In France, you're mainly known for Night-Raven, V for Vendetta. and now Kickback. What are your other works?

DL: Oh, I've got a whole page of credits, you'll have to publish them with the interview... I jump from one thing to another. I mean, a lot of artists... when they finish one thing they go straight on to another. I don't. There are big gaps between the things I do.  If something interesting comes up, I'll do it. Like a Hellblazer, or the War Stories...

The greatest thing about Kickback for me is that it's all mine. I like writing my own stuff, but the problem is that if editors like what you do as an artist, and see how well you illustrate a writers' scripts, they want you to keep doing that. It's very difficult for an artist to get to write his own stuff because he has to make a real effort to do that, and take time out from paying work so he can develop his own idea—in effect, that can mean ignoring calls from editors who want him to do something on someone else's script, or hope the phone doesn't ring with a job offer.

Kickback became more than usually important for me to get off the ground a couple of years ago after I'd just done a couple of war stories with Garth Ennis. I did one that was set on board a destroyer, and one set on a Lancaster bomber. They were good, realistic stories, and they had to be accurately drawn with the use of extensive photographic reference. The result of the research was a good job—but the intensive effort involved in doing it removed much of the simple pleasure of drawing. I wanted to get that back for myself, so Kickback is set in a mythical US city—not a real place at some specific time that needs pictorial accuracy to detail, but in Franklin City, New Plymouth. A fictional city in a fictional state but as familiar in all aspects as any other real city you've ever seen portrayed in a film or a strip. But nothing, absolutely nothing—apart from the revolvers—is completely accurate in structure to the real objects and settings of the contemporary world around us... the cars are just regular basic cars that could be Fords or Chryslers, or whatever other make. It was done without piles of reference material to stop me enjoying my work as well as I could in telling a story that I hope people will enjoy reading. 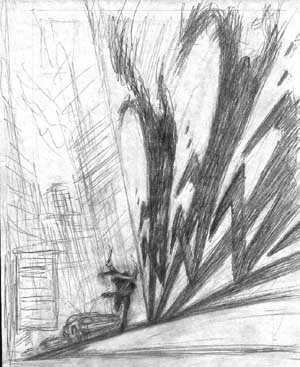 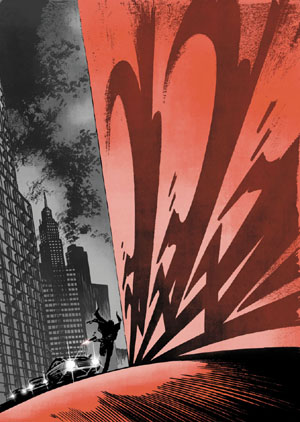 B: Your drawing style is very recognisable, very dark, it gives a very particular mood to your books, were you sometimes tempted to change your style for more commercial stories?

DL: Well I like changing styles now and again. If you see more of my work, you'll see that. But the opportunities to change style a lot in the regular comics market aren’t plentiful—especially when editors like you to do what you're well known for doing most of the time.

I could be more commercial and do superhero stuff, and people always tell me, "Your style is dark, you should do Batman."  But, I'm not interested in Batman - though I had a brush with the possibility of doing one once.  I'm not interested in superhero-style stuff at all, these days, and I hate the way the superhero genre has practically taken over the whole industry in the US.  I like the best examples of them, of course, and loved the early Spider-Man and Fantastic Four stories.  And I did the art for a Captain America short story in Captain America: Red, White and Blue, and the covers for Madrox, the Marvel X character.  Actually, that series was terrific - a great private eye story that was very well done: using super powers in a way that was sophisticated and believable.

B: In Kickback, you use computer effects in your drawing. How do you see the evolution of your style?

DL: I don't think my style has ever 'evolved' in the usual sense of the term. I've always just chosen to use different tools or techniques according to the needs of a story.

I didn't actually plan to use any computer effects at the beginning of Kickback, but it just occurred to me to use them while I was doing it. I know some comic purists hate them.  It's very important not to overuse them. I used them for very specific tasks and they're valuable tools.

What I mainly used the computer for with Kickback is to scan in the black and white art of the pages, reduce it to the size of the printed page, print it out in black and white, and then use colour pencils to colour it. Then I scanned that using the Photoshop filter tool, smart blur. You can turn the texture of the colour pencil work into a pure colour shade, or keep some or all of it, depending on what you want from a page or panel. Copy and paste the black. Make tifs, put it on cd. That's the whole colouring operation done and ready to print.

B: You couldn’t do that with V for Vendetta...

DL: Well, I didn't have a computer like I've got now back then, but if I had, I would have wanted to use it. But nobody in the US was using computers on comic colouring, then. The 'blueline' system of colouring was used on V—something you're familiar with here. It was very different. I made some rules for the colourists who did most of it—like not using strong reds. But it's the actual printing of V that was a problem over a long period. That's just starting to change now. I've been fortunate recently to be able to change the colour balance on some new US and Scandinavian editions of the book. Ideally, I'd like to be able to do that in every country it's published in. Here in France, also.

B: It being such a huge thing, how do you handle the fact that V for Vendetta overshadows your career?

DL: Well I don't argue with that because, to be honest, if I hadn't done V for Vendetta I wouldn't be here talking to you. People wouldn't know who I was. Kickback wouldn't have happened. I don't mind it. It doesn't stop me doing what I want to do. I've done various things. I drawn Global Frequency, Aliens, Territory, I've done horror stories, war stories. They're usually thrillers of one kind or another—but that's what I like doing anyway!  But there's nothing stopping me doing something radically different if I want to. I have the freedom to do anything I want to. Not that I'd use the extent of that freedom just because I have it. There'd be no point to that.

B: What are your future projects?

DL: I haven't got the slightest idea, and I like that, you know. I finished Kickback in September. I'm gonna take three months off. I won't do anything else until January. I might do a single issue of something. I've got no plans. I must say it will depend on Kickback's sales. We need more publicity on it.  But I'm very glad to have done it, and been given the opportunity to do it here, directly for the French market. I like the fact that books here are usually on the shelf for a reasonable length of time. In the USA there are hundreds of new comic books each month, and whatever you've spent months and months creating gets a brief moment in the spotlight then gets relegated to a pile of back issues. And you have a more accepted variety of styles here, too. Of course, there's the traditional 'clear line' style that much of the population is devoted to—but there's a wide variety of other stuff, as well. Like I say—you're lucky here. 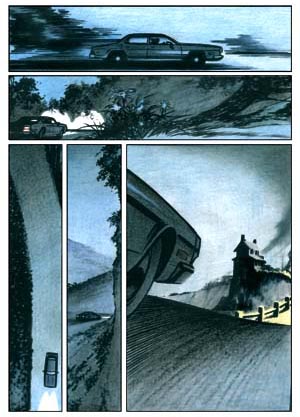 (Answers collected by Lucie, Nicole, Pierre and Stefan Radulovic. A big thanks to Lorba for her help on the transcription.)