Though I can't say I'm a dedicated fan of Raymond Chandler, I always admired the character of Philip Marlowe and Chandler's skill as a writer. I also liked most of the portrayals of Marlowe on screen. So, when I met the writer Jerome Charyn in 1993 in Paris, and he suggested the possibility of drawing an adaptation of one of Chandler's Marlowe stories, The Pencil—something he'd been commissioned to do by the late American publisher, Byron Preiss—I jumped at the chance. 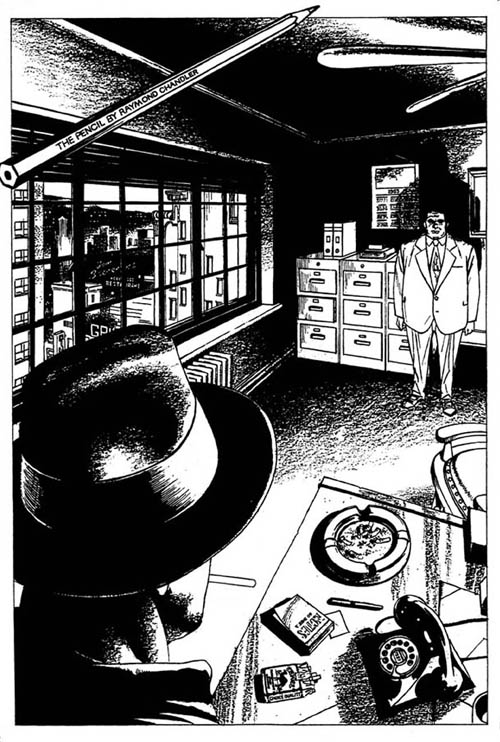 It took a while to draw—and I dedicated myself to researching it as deeply as I could, knowing the aficionados of Chandler and his created worlds were fastidious. I was immensely proud of the final result and looked forward to seeing it in print. Sadly, the US comic market was going through one of its regular trough periods in '94, so its publication was held up—for a very long time. It finally saw the light of day in 2004 in Marlowe: The Graphic Novel.

I was very disappointed at seeing work I'd spent so many hours on consigned to limbo, so during the long gap between its conception and eventual birth, I took the opportunity afforded by a comic arts celebration that was held in Brighton ten years ago to turn the art of The Pencil into a performance piece.

On the stage, Doug Devaney—an excellent actor and playwright of my acquaintance—read an edited version of Chandler's original story as a series of huge, blown-up, un-lettered frames from the strip of the story were projected onto the wall behind him. The performance was further enhanced by the musical talent of jazz saxophonist and composer, Geoff Hearn, who created and played '50s style jazz during regular pauses in the reading. He even composed a special Marlowe theme to open and close the performance.

The event was so successful we repeated it at various venues throughout the country.  We didn't make much money from it, but it was a lot of fun to do. —DAVID LLOYD 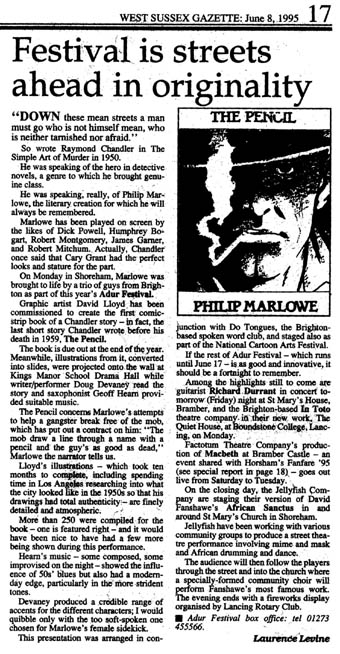