Something To Smile About

Friends,
Not only did I enjoy my signing tour around Italy for the usual reasons - nice people, nice food and nice weather - but I had an extra reason to smile, being the first recipient of a new award at the 3rd Narnia Fumetto festival...
AFUI (Association of Italian Comics Bookshops) is proud to present the first �Comic Bookshops Career Prize� for comic book artist and writers. The prize has been assigned to Mr. David LLOYD, artist of the acclaimed graphic novel �V for Vendetta� and author of �Kickback�, recently published in Italy by Magic Press.
I can only say it's good to be appreciated, and it's an honour to receive such an award from a country that's so jam-packed with homegrown talent!

More news : I'm off next to Belgrade. To the 6th International Comics Showroom event from the 25th-28th September. Anyone reading this who's near that neck of the woods - be very pleased to see you. Details at www.skc.org.yu

Final news for this posting : I'm giving a talk on V For Vendetta at Harrods, the famous London department store as part of their That's Entertainment series of events celebrating the variety of entertainment options the store offers its customers. It's at 6pm on Monday 29th, with a signing afterwards. Go to the That's Entertainment section on the Harrods website - harrods.com - for details to book. It's free, but you have to book. Or turn up and take your chances - I'm sure they won't be jamming the doors!

Wherever I see you, I look forward to seeing you. 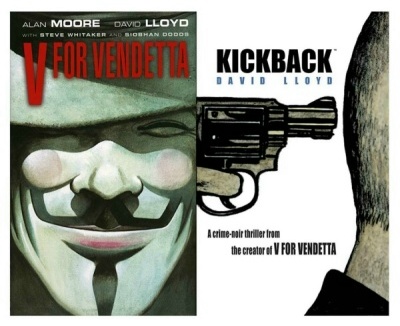 The Chronicles of Narnia Fumetto

Friends,
First, news of more travel - the part of my business which is often the most enjoyable though rarely the most productive.
Narnia Fumetto is a comics event in the town of Narni in Italy, which has kindly invited me to attend on the 6th and 7th September, so if you're anywhere near there come and say hi. Same goes if you're anywhere near my next ports of call on this further tour of a very pleasant country, starting with, Fumettopoli in Regio Calabria on the 9th ; then in Bari, at Neverland on the 11th, and at Mondi Sommersi on the 12th ; and, finally, on the 13th at Antani Comics in Terni.

Secondly, as I mentioned in the July 19 posting , I wanted to show you more about how I work and why - and here's something that's all about that.
The Sherlock Holmes cover illustration that decorated that posting was from a client's simple brief, which called for the depiction of a body in a train carriage discovered by a guard.
Unlike other illustrators of my acquaintance, who often find the right idea popping into their heads from the moment they hear a brief from a client, then produce a rough, or maybe a few roughs to present to them quickly, I invariably find myself embarking on an epic voyage of discovery to try to find the perfect angle, shot, composition, design, lighting effect, and point of view amongst a pile of roughs I find it hard to stop drawing. I rarely find the one I think will be perfect for the client, because the client's viewpoint is his own, and I can't always guess what that will be. I might find one that I prefer above all others, but even that is rare. This particular cover didn't take me too far down that road, because it was so specific in it's location - there was very little room to swing an artistic cat. It was complicated further by my general preference to keep within the parameters of the possible in choosing a ' shot '. I'll bend the rules of perspective, but I won't break them ; I'll take a pov from any direction, but I won't take it beyond the setting.
However, in the case of this particular Sherlock Holmes cover, those limitations I'd imposed on myself were not giving me or the client what was required. They knew what they wanted, and it was something I hadn't been able to find for them. Their only option was to supply me with a sketch ( bottom right below ) to indicate the kind of thing they were looking for, which is what I ended up adapting to the purpose. Initially, I was frustrated with having to follow this because it took me out of my barriers. But it worked, and worked well.
It's comfortable for any illustrator or commercial artist of any kind to think of themselves as someone who can always be relied upon to come up with the goods - it bolsters a sense of security and professional worth - but the reality is that few of us are infallible, and we just have to accept that fact.
Later : even more insights into the agonies of the tortured soul... 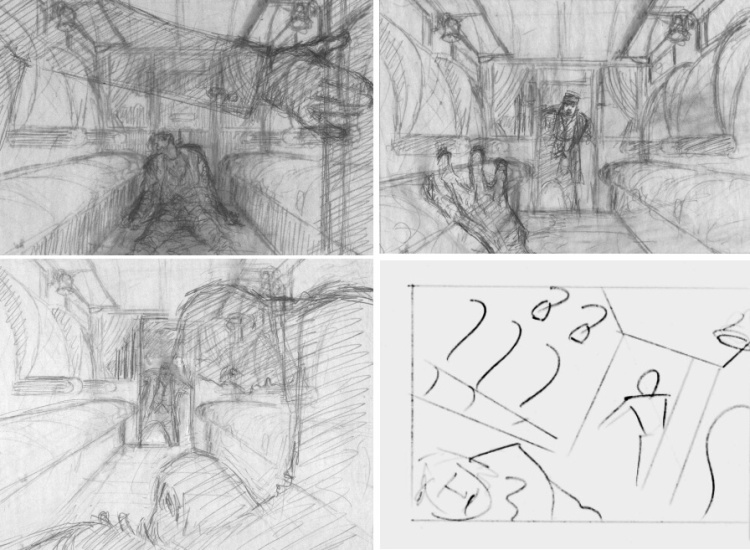