Friends,
Here's another preview of the newly-colored Absolute V For Vendetta bridging pages from the beautiful package coming your way in August.
And while I'm here and showing you this material, I want to clear up a misconception that many of you may be suffering from over how V came to be published in colour after it's long run in Warrior in b/w - in a form that many admirers of the graphic novel still have a great fondness for. This didn't happen because DC Comics insisted on it as part of the deal of reprinting and continuing the serial, as many may imagine. DC's Executive Editor at the time, Dick Giordano, asked me if I wanted it to be reprinted in b/w and kept in b/w for future issues. I said I didn't, because I knew that the widest readership could only be accessed through publishing it in full colour. This was not a decision I made because of a blinkered interest in the greater financial rewards of gaining the widest readership - it was because I wanted the work and its message to spread as far as it could possibly go.
In my view, what had prompted Dick to offer me that choice between colour and b/w from the high position he occupied in a company which was built on colour comics, was the remarkable success of some of the b/w indie books of the time, such as Teenage Mutant Ninja Turtles, which sold massively despite being in monotone. I thought then that this development in comic-reader habits was a detour, not a new highway, and I was convinced that Vendetta could be coloured appropriately and effectively in its new incarnation. Printing didn't always do it's best in representing the skill that Steve Whitaker and Siobhan Dodds - V's major colourists - applied to the work, but that's another long story. For those interested, I can tell you that the definitive colour balances in V were applied to the hardback version of the collection in 2006 and are now also seen in the latest softcovers. And, of course, they will appear in the Absolute edition.
Another of the new pages next posting... 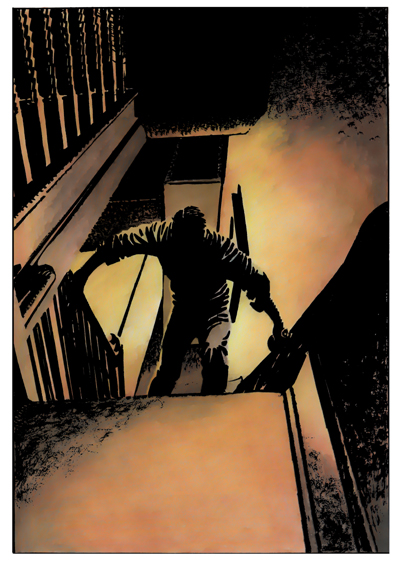 Friends,
Closer to home for my next signing trip - and the last for a while.
This weekend I'll be at Eastercon - the 60th British Science Fiction Convention at the Cedar Court Hotel, Bradford, Yorks, between 10th and the 14th. I'll also be giving a couple of talks there. Details at www.lx2009.com.
The last time I attended a convention that wasn't entirely concerned with the medium I work in was in LA in '06, when the SF con in Anaheim was part of a tour of cons I hastily arranged in an effort to tell as many people as I possibly could about the unheralded release of my crime thriller Kickback in the US. Had a nice time there after initial disorientation and I look forward to having a similarly enjoyable time at Eastercon.
Longer posting, plus more new colour art from the upcoming Absolute V For Vendetta, next week...